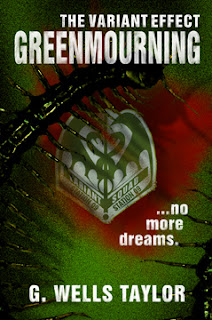 A serial killer called “Pinocchio” is stalking Metro, collecting perfect body parts so he (or she) can construct a perfect body and be a “real boy.” Pinocchio is hiding inside the ranks of the “Variant Squad,” an elite group tasked with protecting the city against a new outbreak of Variant, which in its most virulent form turns ordinary citizens into skin-eating zombie-type monsters.
And meanwhile, a billionaire whose personal agenda involves evolving to a new, Variant-enhanced human 2.0 is manipulating everyone around him to force that outcome sooner rather than later.
It’s enough to make anyone go crazy and the people who make up the Variant Squad aren’t the most solid citizens around. There’s alcoholic Borland who forges a bond with a troubled orphan who gets under his skin in spite of himself. There’s Beachboy who numbs himself with sex and drugs and alcohol—“cranking” in Squad parlance. There’s Hyde, who literally has skin in the game, having lost his epidermis in the last Variant outbreak. And then there’s Marisol, whose own presentation of Variant Effect caused her to literally eat part of herself. Singly and together, these characters are original and memorable, and their interaction is intense, sometimes hilarious and often truly scary.
As any good horror novel should be.
GreenMourning is a sequel to G. Wells Taylor’s novel The Variant Effect, and while that book was good, this one is great, with every aspect of the story and characters amped up a notch. The relationship between Hyde and Marisol plays out in a way that’s breath-taking in its honesty and her “tough love” stance in the face of his reticence is impressive and admirable. Their interaction alone is worth the price of the book.
The various officials who are manipulating events are all very plausible character constructs, and the goings on at the GreenMourning company are convincingly conveyed. Taylor knows a little bit about manipulation himself, and he knows how to whip up his readers with anticipation and mysteries (who IS Pinocchio, for example) while taking them deep into a story that turns the zombie mythos on its head.
The novel ends on a cliff-hanger that will leave readers panting for more. People we like will die. People we thought we knew will surprise us.
No one is safe in the world of this book.
And the Variant Effect is back, and worse than ever.
If you like your horror cinematic and character-driven, you need to check out GreenMourning.
Posted by Katherine Tomlinson at 12:59 AM