Paris! Crime! A book with my name on it 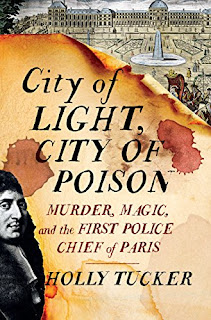 I don't really enjoy contemporary true crime, but I very much enjoy the books of Ben Macintyre and Erik Larson. This new book about the first police chief of Paris sounds like it deserves a place at the top of my TBR pile. Alas, it will not be available until next year.

I love the cover line--Murder, Magic, and the First Police Chief of Paris--who isn't going to read a book that offers all that?  Holly Tucker is a professor at Vanderbilt University (not to be confused with the singer of the same name), and has written several other historical true crime books. I can't wait to dig into them.
Posted by Katherine Tomlinson at 6:58 PM No comments:

Another Great Cover from Laura Gordon of Book Cover Machine I have been on a writing binge lately, mostly turning out short stories and novelettes. I find it's a great distraction from the political landscape and it's also nice to be crossing items off my "to do" list.

One of the projects I've just finished is a reworking of the story "Tiger Bone Wine" I originally wrote for John Donald Carlucci's Astonishing Adventures Magazine back in 2007 when I was first starting out as a fictionista.

I've always been fascinated/appalled by the trade in tiger parts, and every time I see that sobering statistic--less than 3,200 tigers remain in the wild--I want to weep. Three thousand two hundred was the size of my graduating class at Duke. We could all fit into the Duke Chapel. Granted, tigers are bigger than people, but factor in the parents and friends who were also squeezed in and I think that's a pretty good spatial representation of how many tigers are left. One large auditorium's worth if packed nose to tail. Sigh.

At any rate, the new version of the story is called "Tiger Bones" and I found this great cover from Laura Gordon of the Book Cover Machine. Check out her pre-made covers (which are very affordable) or hire her for custom work. Because as you know, people judge books by their covers.

Posted by Katherine Tomlinson at 1:05 PM No comments: 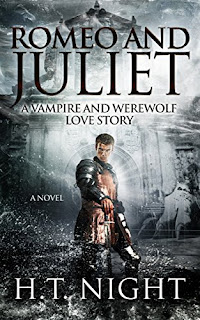 Shakespeare's plays are durable. They can withstand any number of modern adaptations, permutations, and mutations. The whole Underworld movie mythos is based on the vampire/werewolf love story. so I was not surprised to see this book in one of the daily "book dump" newsletters I get.

Author H.T. Night has more than half a million books in print and several are vampire-centric. He has multiple series out there, along with half a dozen standalone novels. He definitely seems like a writer to check out if you like paranormal romance.

This version of the oft-told tale is set in 2099 in a New York now renamed Verona. It has an overall 3.8 star rating in reviews, which is not awesome, but more than half of those who reviewed it gave it five stars and really loved it. I've seen myself how a couple of low-star reviews can REALLY mess up a rating, so I'll definitely see for myself.

Posted by Katherine Tomlinson at 12:51 PM No comments: