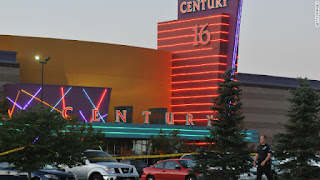 I grew up in a house with a gun in it. When I was younger, I went target shooting with a .22. I have fired large caliber handguns at a shooting range.  I am, in fact, a decent shot, more than good enough to pass LAPD standards.
I am not categorically opposed to private ownership of handguns. I am not a knee-jerk liberal on the subject.I am not advocating mass confiscation of projectile weapons.
But for the love of God, we have to stop mail order gun sales, particularly of automatic rifles, and we need to close the loopholes on sales at gun shows. "Guns don't kill people," gun rights advocates are fond of saying, "people kill people." This is an argument that has been going on since 1963 when a mail-order rifle in the hands of Lee Harvey Oswald killed John F. Kennedy.  Fifty years people.
Enough.
Police in Aurora are now trying to trace the weapons used by a man to kill and wound dozens of people. (As I write this the death toll at the Dark Knight Rises screening is being variously reported as 12 and 13, with the number of wounded between 38 and 50.)  I'd be willing to bet the suspect picked up at least some of his arsenal either through mail order or from a gun show, where sales protocols are riddled with loopholes.

Enough.
Virginia Tech shooter Seung-Hui Cho bought his guns at a Roanoke gun shop, a sale that was later described as "unremarkable." (See the article here.)  He bought the gun five weeks before he opened fire on his classmates. Virginia only keeps records of gun sales for a month.
Enough.
I know what you're thinking.  Why target mail order guns when people can get guns on any street corner gun shop or shifty random person. (The Columbine shooters bought at least one handgun used in the high school massacre from a guy at a pizza shop.)
My feeling is that buying a gun should be at least as compicated as buying a house. There should be checks. There should be paperwork. There should be due diligence. None of that happens in mail order gun sales.  Not really.
Enough is enough is eough.
If you agree its time to put some limits on the ease of acquiring guns, here are some places you can go to learn more about what you can do:

The Brady Campaign to Prevent Gun Violence. This is the organization that was started by Sarah Brady, wife to James Brady, the former press White House Press Secretary to Ronald Reagan who was permanently disabled when John Hinckley tried to kill the President  in 1981.
Another organization is the Coalition to Stop Gun Violence.  The coalition uses much the same imagery as gunrights advocates (the American flag, for instance) in an attempt to defuse the rhetoric that equates gun ownership with patriotism.  You can also contact Stop Handgun Violence.


Posted by Katherine Tomlinson at 11:48 AM