Best in-your-face feminist quote ever:  "If men could get pregnant, abortion would be a sacrament."--Ti-Grace Atkinson. I haven't read a lot of Atkinson. At some point in college I read her pamphlet "Vaginal Orgasm as a Mass Hysterical Survival Response" at some point, probably at the urging of my gay roommate (Atkinson was a member of "Daughters of Bilitis," and advocated specifically political lesbiansim.) Atkinson was exactly the sort of feminist that sexists have in mind when they say feminists have no sense of humor.

Atkinson was influenced by Simone de Beauvoir, whose book The Second Sex is at the top of the list of any woman's studies curriculum.  Simone, the life-long companion of Jean Paul Sartre, is one of the most interesting of the early founding feminists. She's been quoted on everything from retail therapy ("Buying is a profound pleasure") to love and attraction ("Why one man rather than another? ...
You find yourself involved with a fellow for life just because he was the one you met when you were nineteen.") I read The Second Sex but was more profoundly influenced by her 1970 book The Coming of Age. I lived in a three-generational household at the time--and my maternal grandmother and father were frequently at odds with each other. She was searching for a new role in life after being married more than 50 years for a man 15 years her senior. My grandmother refused to surrender to old age and she never accepted the kind of marginalization that often happens to people labeled "senior citizens.' Simone believed that the more primitive societies often treated their elders better than so-called "modern societies." She also believed that death was preferable to certain kinds of aging. "Retirement," she wrote, "may be looked upon either as a prolonged holiday or as a rejection, a being thrown on to the scrap-heap." 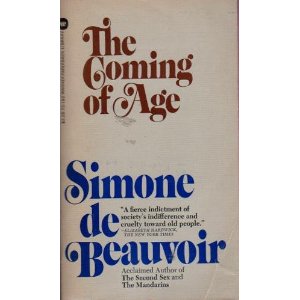 The feminist writer I most enjoyed was Australian Germaine Greer. She made a distinction between what she called "women's liberation" and "equality with men," coming down on the side of "liberation." Her most famous book, The Female Eunuch, was extremely controversial (part of its message was that women had no idea how much men hate them) and so were her politics at the time, which were anarchist/Marxist. She's since mellowed a bit but now refers to herself as "an old Anarchist." (For those following my "summer of Shakespeare," Greer has a Shakespeare connection In 1968 she received her Ph.D. on the topic of Elizabethan drama with a thesis titled The Ethic of Love and Marriage in Shakespeare's early comedies.)
I really liked Greer's style, both in writing and in life. (She was part of a Celebrity Big Brother season, although she walked out of the Big Brother house after only a few days. She published a picture book, Beautiful Boy, featuring photos of beautiful young boys, a spectacularly un-PC choice.)  She is a mistress of the sound bite. Brainy Quote website has a slew of her quotes. Here's one:  "English culture is basically homosexual in the sense that the men only really care about other men."
These three women, along with Betty Friedan, Gloria Steinem, and Erica Jong wrote books that formed the basis of my own feminism.  Later I added Naomi Wolf to the mix. On her current blog she has articles on global financial fraud, the Sandusky sex-abuse case, the kerfuffle over Lisa Brown's use of the word "vagina" and an essay entitled, "Why Women Still Can't Ask the Right Questions." Worth checking out.
I wonder who the millennial feminist writers are?

Posted by Katherine Tomlinson at 9:37 PM