Shakespeare by the Sea 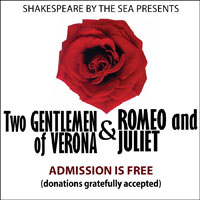 I had no idea when I began the Summer of Shakespeare that there was so much Shakespeare in the Southland or that so much of it was free. A company called Shakespeare by the Sea is celebrating its 15th season of Shakespeare this summer, touring Los Angeles and Orange Counties with Two Gentlemen of Verona and Romeo & Juliet. The performances are free and take place at parks throughout the area (most of which are not actually by the ocean).
Here's a list of the venues, along with donation thermometers to let you know if a performance is fully funded or not (in case you have a little extra cash).
For me, the nearest performance will be August 2nd in Glendale; the play will be R&J.
timeless Tales. Ticketless Admission.
FREE SHAKESPEARE!
Posted by Katherine Tomlinson at 5:55 PM

Labels: Romeo and Juliet, shakespeare by the Sea, Two Gentlemen of Verona