The Beer Connoisseur Online has an interesting post about what Shakespeare drank. (The conclusion is that he was a fan of ale but not of beer.) I remember a line in one of the Henry plays where the bard is dismissive of people who have "a taste for small beer,' which I assumed was something like Miller Lite.Shakespeare Online goes beyond beer and ale into the wine that would have been available to Shakespeare and his characters. (Falstaff was very fond of sack.) The article is sprinkled with quotes from the plays. The blog Not PC has a "Beer O'Clock" entry from 2008 about shakespere and beer. 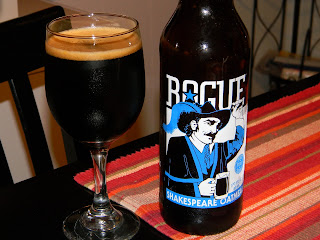 Beer Advocate has rated Shakespeare Oatmeal Stout a 94 (exceptional), while their colleagues have given it a 97, making it a world class beverage.
The United Nations of Beer offers a Shakespeare t-shirt with a beer quote on it.

Posted by Katherine Tomlinson at 2:01 PM