Here it is. Let me know what you think.
Posted by Katherine Tomlinson at 1:34 PM No comments:

L.A. Nocture has been published!

Sample and buy it here.
Posted by Katherine Tomlinson at 11:35 PM 3 comments:

I am unclear on the concept...

I love food blogs newsletters and subscribe to a zillion of them. I am particularly fond of Diana Rattray's about.com Southern food newsletter. Today she sent out a recipe for a strawberry cake that sounds yummy and suggested you make it for a "morning get-together."

Morning get-together? I'm one generation too young for the morning get-together, which sounds really nice. It reminds me of watching Rear Window. There's a scene where New Yorkers bed down on the fire escapes because it's so hot. Can you imagine doing that now? I am nostalgic for that even though it happened a decade before I was born. I want to sleep on a fire escape.

Anyway--enjoy the strawberry cake.
Posted by Katherine Tomlinson at 3:22 PM No comments: 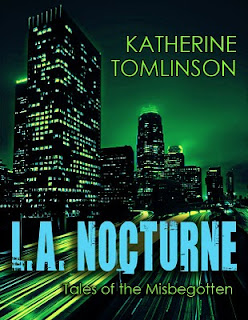 I have been working on my urban fantasy novel Misbegotten for what seems my whole life. I have discovered that I work best in 1500-word bites. While theoretically it should be easy to string enough of those bites together to create the meal that is a novel, it isn't. At least not for me.

Having said that, though, I have created a whole world in which these stories take place, a Los Angeles that's just slightly different from the Los Angeles I live in. I've been writing stories in that world for awhile, and now I'm gathering five of them into a book that'll be out next month. The cover design is by Joy Sillesen of Stony Hill Productions and I am very pleased with it. Not only is she talented, but she is also really affordable, so if you need a cover for a book, or editorial design or just editing, she's available.
Posted by Katherine Tomlinson at 11:02 AM No comments:

I am a sucker for cooking contests. I always enter. I've never won, but there's always a first time, right? Here's a chicken cooking contest that offers a $10,000 grand prize and a year's supply of Foster Farm's chicken. Deadline is May 31.
Posted by Katherine Tomlinson at 6:16 AM 1 comment:

At least I'm getting something done...

Sleep is my super-power. Unlike others in my life and household, I can sleep anywhere at any time on any surface. Since the earthquake in Japan last week, though, I find myself sleepless more often than not.

And so, I while away the hours writing. It's going well. Last night I finished a story I started some time ago. It's set in the world of the novel I'm writing (and writing and writing). It's posted up at Dark Valentine today. Check it out here.
Posted by Katherine Tomlinson at 8:06 AM 3 comments:

Yes--it's another episode of NoHo Noir. This week features one of my favorite characters, Erika Garrett, the high-maintenance ex-wife of good guy James Garrett. If you're following the series, you may recall that she's completely paranoid about other women hitting on her new sweetie, an obnoxious dentist. She is also mother to Ty, a sweet kid who is about to have some problems. But that's getting ahead of the story.
As always, the story has been illustrated by Mark Satchwill. I LOVE the disapproving look on the saleswoman's face. Yes, you pretty much see the whole dynamic of the story in just the one picture... Enjoy it here.
Posted by Katherine Tomlinson at 9:36 AM No comments:

Aid for the Apocalypse

They're saying the quake in Japan was a 9.1 instead of an 8.9. You've seen the pictures. You want to help. Here are a couple of quick ways.

Test JAPAN or QUAKE to 80888 to donate $10 to the Salvation Army via your phone bill.
Posted by Katherine Tomlinson at 6:46 AM No comments:

Broken Dreams is Up at Dark Valentine 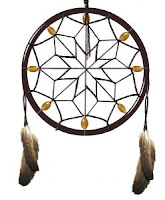 Written under my pseudonym "Kat Parrish," the story "Broken Dreams" originally appeared in Astonishing Adventures Magazine.
I've always been fond of the story, which you can read here.
The story also appears in my fiction collection Just Another Day in Paradise, which is available on kindle.
Posted by Katherine Tomlinson at 2:51 AM No comments:

The last time my family was together, we had lunch at a Mexican restaurant at the beach in Santa Monica. At some point in the meal, my sister-in-law was talking and apropos of nothing, my sister announced that people often mistook her for Cindy Crawford. It was such an odd comment that my sister-in-law just kept talking.

It was not the first time my sister had said such things. Once, in the middle of a conversation about something else, she'd announced that she could be a super model. I'd laughed, thinking she was making a joke. She wasn't. Not only was she not joking, she was really annoyed at me for dismissing the idea so casually and, well, so dismissively.

And here's the thing. Back in her twenties, when she was healthy and happy, my sister was a pretty girl. She had fabulous hair and was six feet tall and had green-blue eyes that sparkled.

By the time she was talking about being a supermodel, her looks had been wrecked by years of illness and bad food and worse decisions. I was with her once when she stopped a passerby to ask for directions and he mistook her for a homeless person. She had lost more than several teeth and her hair had been chopped off haphazardly because she couldn't keep it from knotting.

She had friends who thought she was just fine and that her other friends (who by now were rapidly de-friending her) and her family members who were concerned about her were just being party-poopers. There were shrinks. ("My psychiatrist thinks you're the one with the problem.") There was rehab (and a refill of a vicodin script the same day she got out). There was a methadone program. Her three counselors came to her funeral.

A lot of people think Charlie Sheen is hilarious. And damn if the guy hasn't got a way with a catchphrase. But I'm not laughing.
Posted by Katherine Tomlinson at 11:15 AM 1 comment: 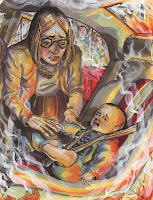 Yes, it's Sunday self-promotion day as another episode of NoHo Noir appears on patch.com.

This episode ties together characters from three separate storylines in an incendiary way. The artwork is by Mark Satchwill and features the mother of the missing girl from "Good Samaritan" and "Mother Love."

You can read "Maternal Instinct" here.
Posted by Katherine Tomlinson at 5:21 AM No comments:

I went to a book-signing for Kelli Stanley yesterday at Book Em' mystery bookstore in S. Pasadena (a wonderful place to drop a dollar or two). Had a great time and came away energized and inspired. I went to a Sisters in Crime event a couple of years ago that left me feeling the same way. I had wanted to go to Bouchercon last years when it was in San Francisco but that didn't happen. Now I have my sights set on Bouchercon 2011 in St. Louis. I've been to St. Louis in the summer. it's sticky. but that's why they made air conditioning.
Posted by Katherine Tomlinson at 5:18 AM No comments:

"Love the One You're With" updates the story begun on Valentine's Day when Erik's proposal went so badly awry. Read it here.
Posted by Katherine Tomlinson at 6:30 AM No comments:

I didn't get the memo. I never read my Duke alumni magazines any more unless the cover story intrigues me so I hadn't heard the news that Reynolds Price died in January after more than 20 years fighting the cancer that put him in a wheelchair and inspired his 1994 memoir A Whole New Life.

Price was a novelist, a poet, a Rhodes Scholar. (At commencement every year, he would wear the Oxford colors, a practice other professors mocked.) He was a James B. Duke professor at Duke University (his alma mater) where, among other things, he taught a semi-annual seminar on Milton. You couldn't take it your freshman year, so I had to wait until I was a junior to enroll. It was worth the wait.

In fact, taking that class was pretty much my whole reason for applying to Duke. Even at 17 I was already word-struck and his brand of grandiloquent Southern writing appealed to me. (Another professor I adored used to mock Price's penchant for somewhat heavy-handed allegory, as when he named a character in his most famous novel Pomeroy--as in King of the Apples, as in ... the devil.)

If you don't know Price's work, here's his Wikipedia entry, which says that he was one of Bill Clinton's favorite authors.

To this day I can quote huge chunks of Paradise Lost. There were other lessons I learned in the class but that was my take-away.

Reynolds Price is dead. Somehow I should have known.
Posted by Katherine Tomlinson at 2:20 PM No comments:

I'll never make this myself because Trader Joe's carries an outstanding frozen sticky toffee pudding, but when Kate Middleton's recipe for the sticky toffee treat showed up, well, I had to make a note. If you've never had it, the dessert is an incredibly decadent confection of moist cake (filled with dates) and buttery toffee sauce. Here's the link to the recipe.

P.S. Sticky Toffee Pudding is said to be Johnny Depp's favorite dessert. Just so you know...
Posted by Katherine Tomlinson at 4:31 AM No comments: