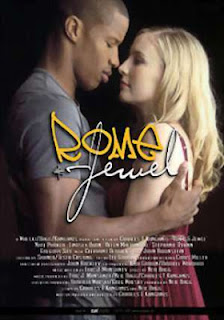 This hip-hop musical version of Romeo &Juliet has some great moments. John Rubinstein plays Mayor Capps (Jewel's father) as the whitest white man in Beverly Hills--all capped teeth and spray tan. Cleavant Derricks plays Rev. Q (Rome's father), who opens and closes the film with his sermons from the little South Central church where he's the pastor. These veteran actors anchor a surprisingly effective modern urban take on the story that would have worked a lot better if the young actress playing Jewel had had a better voice.  Everyone else handles the songs (which are fine) but her voice is so reedy and thin (especially in an awkward "Sweet Sixteen" rap where she's grinding all over Rome), that the energy of the movie just deflates every time she opens her mouth.
As the movie opens, Rome is at odds with his minister father, who is furious he's blown off an important church meeting to dog a girl named Roz. Rome admits "the bitch messed me up" and his friend DJ Mercury (Allen Maldonado, who's great) invites him to a sweet sixteen party where he's performing to take his mind off the girl.
The movie was only out for a week in what was probably extremely limited release and made less than half a million. That's a shame because it eally was a smart transposition of the timeless story of star-crossed lovers.
Posted by Katherine Tomlinson at 1:22 PM