Andy Griffith and Me... 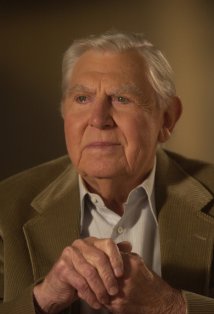 I was once in an elevator with Andy Griffith. He smiled at me and asked which floor I needed. I told him and he pushed the button for the floor. I said thank you and he smiled again.
Andy Griffith punched my elevator button!!!
I once interviewed actor Joel Higgins, who costarred with Andy Griffith on a television show called Salvage-1. Higgins told me that of all the people he'd met in show business, Andy Griffith was the person who was most--"what you see is what you get." He admired him.
I watched The Andy Griffith Show and wanted to live in Mayberry.(Years later, while going to college in North Carolina, I used to pass by Mt. Airy, Griffith's hometown and the basis for Mayberry. It's still a small town, with a population of around 10,000 people.)
\I later learned that Andy Griffith could do a lot more than the folksy stuff he did in the Andy Griffith Show and later, in Matlock. (A big fave with my father, who was not unlike Matlock himself.)
He was terrific in a television movie called Savages, which was a riff on The Most Dangerous Game.
And he was outstanding in A Face in the Crowd.  Made in 1957, A Face in the Crowd is about a hobo who becomes an overnight media sensation and then begins to act like a monster. It's scarily relevant to today's celebrity culture. If you've never seen it, you should. It costars Patricia Neal, Lee Remick, Walter Matthau, Tony Franciosa and a slew of character actors you'd recognize.
Goodbye Andy...

Posted by Katherine Tomlinson at 10:36 AM