Turning Shakespeare Inside Out--Rosencrantz and Guildenstern are Dead 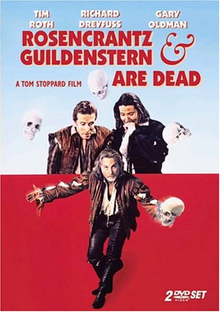 I first saw Rosencrantz and Guildenstern on stage in the 80s, but Tom Stoppard wrote it in 1966. I loved it.  I loved it not just for the clever way that the playwright inserted his characters' point of view into the story, using a sort of theatrical kaleidoscope that showed something completely different (a technique used in later plays like Wicked) when the view shifted, but also for the language.  R&G is very much a play about language. The play is full of quotable lines--"Who is the English king?" Rosencrantz asks. "That depends on when we get there," Guildenstern responds. The Player has a great speech about the kind of entertainment he and his players provide, offering up love, blood and rhetoric in various combinatins, but always with blood. ("The blood is compulsory," he says.) 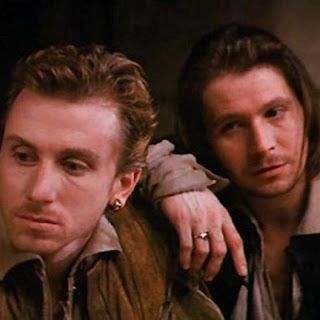 In 1990, Stoppard directed a film version of his play starring Tim Roth and Gary Oldman (Commissioner Gordon himself). Both men look impossibly young (Roth was 29, Oldman was 32) and Oldman actually has a scruffy Heath Ledger-in-the-Imaginarium of Dr. Parnassus-thing going on.   Oldman plays Rosencrantz as an innocent fool,  with Roth playing the only slightly more savvy Guildenstern. The two play off each other really well, especially in an early scene when they're trying to remember what they're doing riding toward Elsinore and when they're trying to figure out exactly what's going on with Hamlet.
The movie is currently streaming live on Netflix, or you can buy it used from Amazon for less than $5.


This play isn't the only time that Stoppard has fiddled around with Hamlet. He has also written Dogg's Hamlet and Cahoot's Macbeth, two plays meant to be performed together, Dogg's Hamlet plays with language also (in a way that will remind Stoppard fans of his play Travesties) and Cahoot's Macbeth is a shortened, stylized version of "the Scottish play."
Stoppard also wrote The 15-Minute Hamlet, which is exactly what it sounds like, the entire play reduced to 15 minutes. You can catch all kinds of performances of this play on YouTube, The version you won't want to miss is the two-part, short-film adaptation that stars Austin Pendleton as Hamlet, Philip Seymour Hoffman as Laertes, and Xander Berkeley as Shakespeare. Here's the link to part 1. Here's the link to part 2. The filmmaker is having a really good time sending up Hollywood filmmaking, which adds an extra layer of playfulness.

Posted by Katherine Tomlinson at 7:28 PM