Review of Romeo & Juliet Sealed With a Kiss

I grew up on classic, Disney-style animation but I'm not really a fan of the genre, despite really loving Monsters, Inc. and the Toy Story series from Pixar. (I was put off by the character design in Brave, for instance, because I thought the princess looked like a red-headed troll doll.) 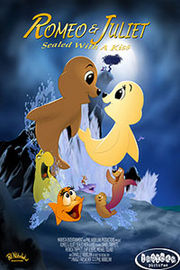 I'm not someone who ever sat around in my jammies on Saturday, eating cold cereal and watching cartoons. And so I find it hard to get past ugly animation and enjoy the story. (An exception was for the first season of the Ghostbusters animated series, which I found myself addicted to.)
My expectations for Romeo & Juliet: Sealed with a Kiss (2006) were pretty low.
the movie was clearly a labor of love and done on a budget. Phil Nibbelink was director, writer, animator and voice talent and a comic relief character called Kissing Fish was voiced by Chanelle Nibbelink (wife, daughter, sister?). The actors voicing Romeo and Juliet (who are, in this family-friendly re-imagining, seals) have the same surname, but whether they're related by affinity or consanguinity, I don't know.
Nibbelink has a lot of good ideas here--and his instincts for what will make good musical interludes are sharp--but the constraints of his budget are everywhere. The quality of the animation is so poor that at times, in the long shots, the seals look like cavorting brown and white sperm. 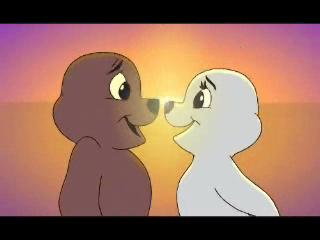 Romeo and Juliet are as big-eyed as Keane portraits, and drawn very small in relationship to the other seals (except for fat Benvolio, a sweet comic relief character who is genuinely amusing at times). The problem is that there's a kind of disconnect between the way the young seals look and the intensity of their love. That's of course the point of the story--the passion of the young lovers--but transposed to animation and it feels a little off-kilter.
Mercutio, Romeo's best friend, is a here a fun-loving seal with musical talent and a lot of chutzpah. Nibbelink salts his dialogue with tons of Shakespeare quotes, repurposed to fit his story. "All the world's a stage," he muses as Benvolio enthusiastically adds, "Let's act!" (Mercutio looks distractingly like Scooby Doo at times.)
I'm all for introducing kids to Shakespeare but am not sure that Romeo & Juliet is the play to start with.  This one has some scary stuff--when Friar Lawrence shows up with Juliet's body, she looks dead--but all it takes is the touch of a golden/rosy dawn and everything is all right.
When the movie came out, 54 percent of critics liked it but it made less than $500 thousand domestically.  (According to IMDB, the budget was around $2 million.)
You can get a pretty good idea of the movie from the trailer, which is here.
The movie didn't do much for me, but then, I'm not the target audience.


Posted by Katherine Tomlinson at 10:13 AM