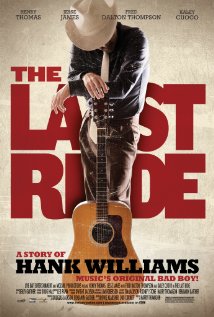 I just got back from seeing The Last Ride, a story about Hank Williams' last days. The movie stars Henry Thomas as Hank Williams, and though he's a decade and a half older than Williams was when he died (29), the hard-living singer/songwriter looked even older.
I'm not a fan of what the movie calls "hillbilly music," but Hank Williams transcended categories. You know all the songs that form the soundtrack of this movie, and there were so many, many more--three of which hit the top 10 after he died.
If you took Hank Williams' life and turned it into a crime drama, you wouldn't have to change much of anything to make him a classic noir character.
His mother ran a whorehouse ("Beat that," he says to the young man driving him around, played--and played well--by newcomer Jesse James.) He was baffled and bedazzled by women and it got him into trouble. He drank and smoked and drugged. He raised hell. And he died after a bar fight. he had a double dipping of talent and he threw it away with both hands.
The movie is leisurely--at two hours, it's about 30 minutes too long--but it's worth catching, if for nothing  more than Henry Thomas' performance as Hank. You can see his charm. You can see his bitterness. You can see his world-weariness. It's a good performance in a movie that's not so good. (Although I will say this for the writers--they know their southern phrases and they're pitch perfect, which you don't often see.  When a girl named Wanda--played by Big Bang Theory's Kaley Cuoco--tells James' character how her father died, she says "he died of the black lung." The "the" is important there--nobody from that part of the country ever just says "of black lung.")
If you're in the mood for a bio-pic with a noir-ish edge and a fair amount of heart, check out The Last Ride.

Posted by Katherine Tomlinson at 4:53 PM