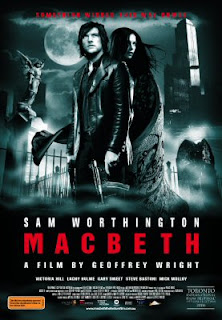 There are more than 60 different versions of Macbeth listed on IMDB, which is kind of amazing. This film, a modern-day adaptation set in Australia, is ... intriguing. It opens with three red-headed schoolgirls defacing the gravestones in a cemetery, a sequence that is disturbing and creepy, especially since the colors are so subdued that their red hair and the red paint they're using just pops out like ... blood.
The scene soon shifts to a neon-soaked waterfront meeting place where a drug deal goes sideways in an operatic, balletic orgy of violence that is equal parts Quentin Tarantino and Baz Luhrman.
Director Geoffrey Wright filmed the movie with more Dutch angles than an Amsterdam neighborhood, but the overall effect is incredibly stylish. There's real carnality in the scene where Macbeth is confronted by the Weird Sisters who hail him as the Thane of Cawdor and he who shall be king thereafter.
He has never really considered the idea--we get the impression he's really sort of a drone--but once he's considered the possibility of being the king, the idea will not leave him alone.
The adaptation maintains Shakespeare's dialogue but strips it down to the bare minimum. (That's good because sometimes the actors' Aussie accents get in the way, as in the line, "Takes the reason prisoner," which comes out "Take the raisin prisoner.")  A lot of dialogue is delivered as voiceover, which keeps it from sounding too melodramatic in the context.

Sam Worthington plays Macbeth as if understudying Heath Ledger with his lank hair and haunted eyes. I don't find him the most interesting actor in the world, but he does a decent job here, especially in the scene where he expresses doubts about murdering Duncan while he's under his roof.
Victoria Hills, who also wrote the screenplay, is a ferocious Lady Macbeth, however, and she REALLY likes the idea of her husband moving up in the world.
The death of Duncan is a bloody, visceral scene and the final sequence between Macbeth and Macduff is a bone-crunching, bone-spurting mano a mano that's very effective.
The modern-day setting amongst Melbourne gangsters feels completely organic (proving once again how flexible Shakespeare and his plots are), and the movie moves quickly. For me, the high point really is the opening, but I didn't feel like I'd wasted 109 minutes of my life by watching the whole thing.