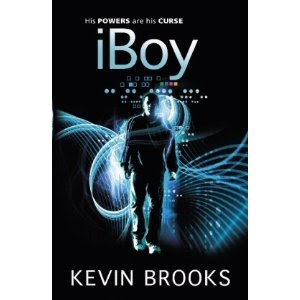 iBoy is one of the best books I've read in a long time and it seems to be completely under the radar. It's a coming-of-age story and a super-hero origin story and it's not like anything you've read.

One minute Tommy Hawkins was a normal 16-year-old boy heading off to a friend’s house to talk to her about something and the next thing he knows, someone has called his name and thrown a cell phone from a great height—shattering his skull. The book is set in a gang-infested council flat in England and it is as gritty as, say, the movie Dirty Pretty Things. Bad things happen in this story and the "big bad," a gangster called Howard Ellman, is one of the scariest villains in the YA fiction world.

As Tommy transforms into something not altogether human, the writer does something subtle with point of view that really elevates it above the genre. He doesn't pull punches, but his main character is such a good-hearted kid that we come along for his ride willingly.

If you don't have time to read a novel this weekend, check out Chris Dabnor's flash fiction "The Folly" over at Dark Valentine.

You should also head over to Clarity of Night where a new flash fiction contest is in progress. I have a story up there and so does my good friend John Donald Carlucci. At last count, there were 40-some stories, but they're only 250 words max, so you can gobble them up like chocolates.
Posted by Katherine Tomlinson at 4:40 PM 4 comments: