Chocolate had been imported to Spain early in the 16th century and chocolate beans were given as part of royal dowries all over Europe by the 17th century, so of course Shakespeare knew about it, and had probably partaken of the hot beverage that would later become an addiction alongside tea and coffee. He would not, however, ever tasted a Cadbury bar or a silky Godiva truffle. 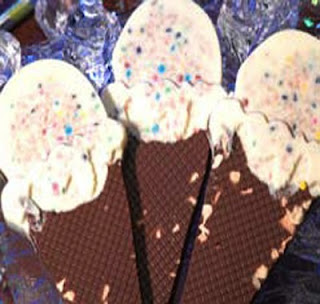 Shakespeare's Chocolate in Davenport, Iowa, sells chocolate, pretzels, do-it-your-self s'mores kits (although that sounds kind of redundant) and more. One of their best sellers is a trio of "ice cream cones" crafted out of white and dark chocolate, tagged "Candy Crunch."  Definitely a company to check out if you buy mail order sweets for Christmas (or other holidays).
Posted by Katherine Tomlinson at 5:06 PM