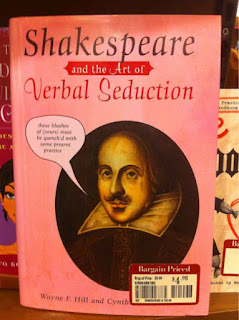 As I've been wandering about the web in search of interesting Shakespeare stuff, I've noticed that there are more than a few items with "Shakespeare" as a brand name. I started Googling a bit for more information and ran into some interesting articles on just that subject.  This article on Shakespeare in Advertising appeared on Transmedia Shakespeare (studying Shakespeare beyond the text).  It begins:  Shakespeare. One word, a name, that represents so much more than a man. Shakespeare is an industry, a language, a symbol of literature and art, and an era in time. The advertising world has used this to their advantage, and Shakespeare’s influence can be recognized in almost every branch of pop culture.
The No-Sweat Shakespeare blog has an intriguing article called "The Shakespeare Brand in the World of Commerce." Starting with the example of the Learjet, the article discusses what the writer calles "Shakesploitation."
Shakespeare author Ben Alexander has some interesting figures here, showing where the search term "Shakespeare" rates in the Google-verse.
Posted by Katherine Tomlinson at 7:31 PM