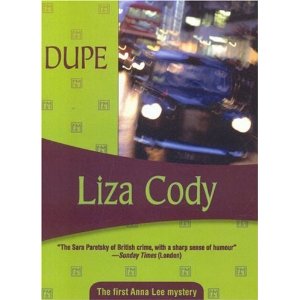 I am going to Bouchercon 2012 this year and am very excited. But I wish I'd been there last year when Liza Cody was there and taking part in panels like "Telling Women's Stories." (She refers to it as "the inevitable feminist panel.")
I love Liza Cody's series protagonist Anna Lee and her novel Dupe (which, according to Wikipedia introduced the professional female private detective to British Mystery fiction) was the first I ever read. Cody also has a series about professional female wrestler, Eva Wylie. I've not read any of those books because the backdrop doesn't interest me, but I'll get around to them at some  point.
I love that Anna Lee is smart and savvy and totally real. It's an ongoing complaint that there aren't enough female protagonists in crime fiction, and I always point people toward Liza Cody in response.

If you go to Liza's site,  you get a real sense of the writer as a person. There are pictures of artist/friend whose exhibition she helped mount. There's a book cover photograph taken by her grandson, with herself and one of his friends as models. There is a discussion page that begins with a quote from the Japanese poet Basho. You get the sense that this woman has a rich, full life full of art and music and family and friends and poetry. (Before she turned to writing crime fiction, she worked in various arts-related jobs.) 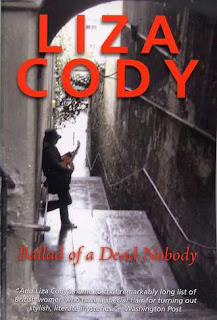 Her most recent book is  Ballad of a Dead Nobody (published June 2011).
You can follow Liza on Twitter: @LizaCody

Posted by Katherine Tomlinson at 1:08 PM