Even the greatest writer ever can have an off day!

Like any writer, Shakespeare had his ups and downs. He is generally  believed to have written 37 plays (in only 20 years) but if you look at the plays that show up in rep year after year after year, you start to see the same 15 or so plays over and over. Someone's always reviving Hamlet, Romeo and Juliet, Othello, the Tempest and Much Ado About Nothing. You can take your pick of Macbeths and Henry Vs and any number of Two Gentlemen of Verona.
Just try, though, to find a production of Pericles.  According to some sources, Shakespeare was just a co-writer on this play, responsible for roughly half the lines. (The other writer is supposed to be a man named George Wilkins. Not much is known about Wilkins. He was apparently an inn-keeper who was into some dodgy activities. 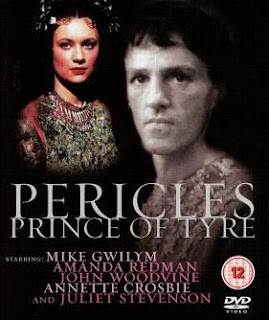 The basic plot is that a man offers his daughter's hand in marriage to anyone who can solve a riddle but those who fail to solve the riddle will die. Pericles, Prince of Tyre, understands the riddle but ... well, it's not that simple is it?
Welsh actor Mike Gwilym, who played Dick Francis' jockey hero Sid Halley in some early adaptations of the novel The Racing Game, played the prince in the BBC adaptation of the play. Welsh-Canadian actor Geraint Wyn Davies, now a mainstay at the annual Stratford Shakespeare Festival (he's in Cymbeline this year), played the part for them at least two decades ago. (My friend Susan Garrett, who did a lot of fan fiction based on his cult series Forever Knight, had a photo of herself taken with a standup of the actor in his Pericles armor. It's a great picture but I can't find it.)
I've never seen this play performed live. I did see the TV adaptation with Gwilym but remember almost nothing about it except that Gwilym had the most intense eyes.
Posted by Katherine Tomlinson at 1:28 PM