The Physick Book of Deliverance Dane ... a review 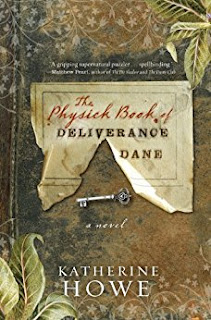 The Physic Book of Deliverence Dane by Katherine Howe


A historian doing her mother a favor stumbles across a secret that changes her life.

Deliverance Dane was a “cunning woman” in the 17th century who failed to heal a child and became the subject of vicious gossip and accusations of witchcraft. Connie Goodwin is a Harvard-trained historian whose mother Grace sends her to Marblehead to clean out her grandmother’s house. While doing so, Connie runs across a reference to Deliverance that sends her on a quest to find the woman’s missing “book of physick,” her recipe of spells.

This dual time-frame story offers a somewhat different perspective on the Salem witch trials is much more interesting than the contemporary story. Connie isn’t as engaging a protagonist as Deliverance, and her academic search for the book of physick and the truth about Deliverance pales beside Deliverance’s own narrative. ture about some aspect of colonial life), but the stories being told here do not draw us in as much as they should.


View all my reviews
Posted by Katherine Tomlinson at 2:43 PM