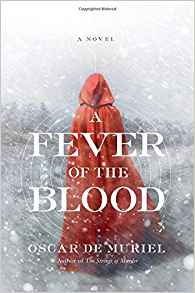 A Fever of the Blood is the second book in the historical Frey & McGray crime series. Set in Edinburgh in 1889, the novel blends mystery, horror, and history in a story about two mismatched detectives. The original cover, which can be seen on a version published under Penguin’s Michael Joseph imprint, had a very different feel and has the retro feel of a steampunk-themed Tarot card deck.

“This cover was deeply inspired by scenes and elements in the story. When I started designing we decided we wanted this cover to be dramatic, atmospheric and elegant. Even though this cover seems to be made of one dramatic image, it’s actually a composite of multiple images: a handmade snow texture, an image of highlands, the circle art that interacts with the figure, and the hooded figure of course. The final book was finished with a rounded emboss on the type, and pearlescent shimmering stock creating a beautiful final printed package.”

Outside of design Derek loves spending time with his wife and three kids, playing sub-genres of metal on his seven-string guitar, and dreaming of future tattoo endeavors.

Posted by Katherine Tomlinson at 9:41 PM

Labels: A Fever of the Blood, Derek Thornton, Faceout Studio