For some reason a ton of cozy mystery series take place in Indiana, where the state motto is "Crossroads of America." Probably the best-known are those by Ralph McInerny who also wrote as "Monica Quill." These include the Notre Dame mystery series and the Andrew Broom mystery series. McInerney is also the author of the 28 "Father Dowling" mysteries, which are set in Illinois. He was incredibly prolific, and in addition to his fiction, wrote poetry and books of philosophy and theology.

At the other end of the spectrum is Frank Bill's stunning debut collection of short stories, Crimes in Aouthern Indiana. His part of hte state is inhabited by desperate losers who commit acts of unspeakable violence for reasons they barely understand themselves. Dog-fighting, meth-making, survivalist characters make this "pulp-noir" book an instant classic. 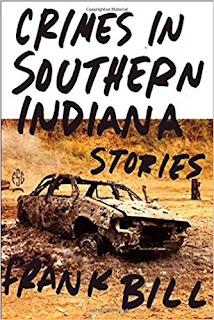 For an earlier generation, though, Indiana was the setting for the gentle classic The Friendly Persuasion by Jessamyn West. Based on the author's memories of growing up Quaker in a southern Indian far removed from Bill's, the novel was published in 1945 and made into a movie with Gary Cooper in 1956. (The screenplay of the movie was written by Michael Wilson, one of the so-called "Hollywood Ten" who was blacklisted during the McCarthy era for his political beliefs.)

A book that's been on my TBR pile for a while now is She Got Up Off the Couch: And Other Heroic Acts from Mooreland, Indian, a fictionalized memoir by  Haven Kimmel, it chronicles the adventures of a woman increasingly dissatisfied by her life who decides to do something about it. This is shelved next to The Prize Winner of Defiance, Ohio, another book about a woman with gumption. I come from a long line of women with gumption and i like reading about them.

Posted by Katherine Tomlinson at 11:10 PM