I've spent a lot of time in Arizona. I've been to the Tuscon Gem and Mineral show, I've been to the Arizona Sonora Desert Museum, which is an amazing place, especially if you're their for thier "Raptor Show." I've toured Biosphere 2 in Oracle, AZ and generally soaked up the sun in Phoenix. It's a red state, so I don't think I could live there, but I do like to visit it.

Three Arizona books stand out for me. one is Navajos Wear Nikes, a memoir by Jim Kristofic, who grew up on the reservation after his mother took a job working at a hospital there. He's an outsider--a white kid--but it's still an intriguing look at life on the reservation.

There's also Leslie Marmon Silko's Almanac of the Dead, a nonlinear, multi-character novel that meanders from the US to Central America. The book was published in the 90s and the writer's treatment of gay characters (way too many of her villains are gay), but that sadly reflected the tenor of the times. 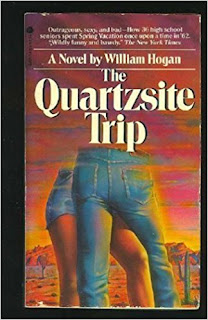 The book that's stayed with me the longest, though, is The Quartzite Trip, a novel about a school trip that goes very, very wrong that really gets teenage feelings right. There's a scene where a guy looks at a girl who's plagued by acne and as he sees her in the moonlight, he realizes what a beauty she is. It's incredibly tender. I can't believe this book is out of print. It's one I read, along with Red Sky at Morning, that made a deep impression on me and 36 years later, I can still remember the way it made me feel.
Posted by Katherine Tomlinson at 12:20 AM