Killers of the Flower Moon...a review 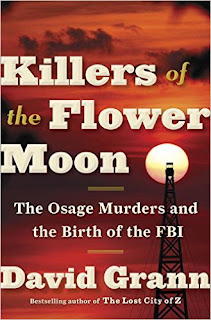 The true story of a federal investigator who broke a murderous conspiracy orchestrated by a white businessman who was murdering Osage Indians in order to acquire their oil lease money.

This is a story that has a little bit of everything—sex, murder, greed, money, racial politics. The author (who also wrote the terrific LOST CITY OF Z), takes pains to place us into time and place as the story begins, and there are hints of Osage ritual in Anna’s funeral that are both visual and moving. (Mollie’s family practices a blend of Catholicism and Osage tradition.)

He also takes his time setting up his characters, particularly the complex, charismatic William Hale, a white businessman known as “the King of the Osage Hills. The “plot’ has a lot of moving parts and there are wheels within wheels turning here.

The family relationships of both the whites and the Osage are complicated. And the people are equally complicated. Bill Smith, a white man, was a horse thief before marrying a wealthy Osage woman. He was known to “raise his hand to her” and to say to other white men that hitting his woman was the only way to handle a squaw. (Like the other white men married to Osage, Bill was called a “squaw man.”) But when the murders started happening and his mother-in-law died in the exact same way that his first wife, Bill genuinely wanted to get to the bottom of it.

The characters here are outstanding, particularly Bill’s sister-in-law Mollie. She is a strong woman who is the glue that holds her family together. Educated in a BIA school, she is a woman with a foot in both worlds. She speaks English but she wears the blankets of her ancestors and keeps her hair long instead of in a “Roaring Twenties’ bob. She is smart, tough, and strong.

This is a compelling story wrapped around great characters with an issue of social justice at the heart—a true story as twisted as any cable miniseries.

Posted by Katherine Tomlinson at 10:35 PM