I have never been to Colorado except in movies and books. I read Isabella Bird's wonderful A Lady's Life in the Rocky Mountains when I was in middle school and it sent me off on a binge of reading
about women explorers. And of course, since Stephen King is one of my favorite authors, I checked into the Overlook Hotel in Sidewinder, Colorado when I read The Shining, and later, Doctor Sleep.
But most of what I've read about Colorado has to do with the Columbine high school shooting. (Interestingly, the high school massacre is not the first massacre in Columbine's history. In 1927, a union action went bad when police and coal miners clashed in what's become known as the Columbine Mine Massacre.)

I don't read a lot of true crime books. I'm not an avis follower of lurid criminal cases on TV. I will admit that the JonBenet Ramsey case intrigues me and I wish someone would explain how she got that strange first name.) I like watching homicide hunter because I enjoy Joe Kenda's character but also because I know that the crimes depicted on the show were solved and the person (or persons) responsible were brought to justice. As Kenda would say, "Justice. It works for me." 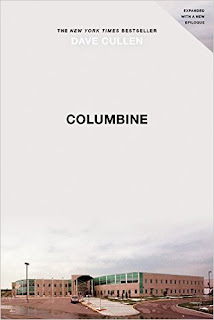 But Columbine was a whole new level of crime and at the time, the narrative around it seemed familiar. Misfit kids. Outcsts. Yadda-yadda-yadda. Except...that's not how it happened. Dave Cullen's book Columbine (see an excellent review by Jesse Kornbluth here) tells the real story and it will chill you. Dylan Klebold's mother Sue has done a TED talk about her son and his friend Eric, and watching that in conjunction with reading Columbine will make you want to weep. She. Had. No. Idea.

Posted by Katherine Tomlinson at 2:41 PM