Brotherhood of the Wheel...something different in Urban Fantasy 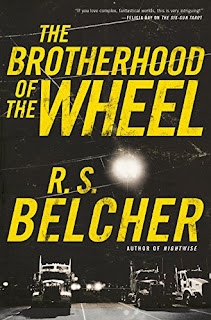 I love urban fantasy, but lately it's felt pretty stale. How many leather-clad women in katanas can one genre support? And even as someone who writes the occasional vampire story I'm starting to get a little tired of bloodsuckers. And then I read R. S. Belcher's Brotherhood of the Wheel. It's got a really ugly cover that doesn't really convey "urban fantasy" but look past that and what you get is unexpected, original, satisfying and--I really hope--the beginning of a series.
Brotherhood of the Wheel sets up a world in which the tradition of the Templars is alive and well with a group of men and women who "live on the asphalt." They are protectors of the innocent, and they can "see" the signs of evil that others cannot. And from the exciting opening when a trucker and a gypsy cab driver help capture a serial killer and save his latest victim, the book is filled with action and myth and genuine emotion and actual horror. It also has tremendous world-building and humor. (Some of the humor is a tad whimsical for my taste but overall, I think this is a terrific book.)


The story is woven together from the viewpoints of several characters--Jimmie the trucker, Heck, his Afghanistan vet biker "squire," and Lovina, a black New Orleans cop to name just a few--and they are rich and dimensional beings with backstories and context, and real lives. They're good people doing good things in a bad world and they have flaws, because they're human beings.
But not everyone they meet is human. There are killers who trade in the dark arts for near immortality. There are ghosts who need help finding their way home. (This particularly storyline leads to a heart-breaking scene.)

There's even a character named Aaron who was once known to the world by another name, a lovely little Easter Egg for readers.
The evil that lurks is genuine and BEKs--Black-eyed kids--who have emerged as a cyber age urban legend are well used to eerie and horrific effect.
I now want to read everything Belcher has written. And I want more adventures of these "Knights of the Road."
Posted by Katherine Tomlinson at 1:19 PM