I've always wondered why Shakespeare didn't take a crack at writing a play about Jesus. Perhaps because it would have been seen as heretical. After all, D.H. Lawrence got plenty of criticism for his short work, The Man Who Died some three hundred years later. (If you've never read that, it's available from Project Gutenberg online.) Imagine the fallout there would have been had he kept the book's original title, The Escaped Cock. 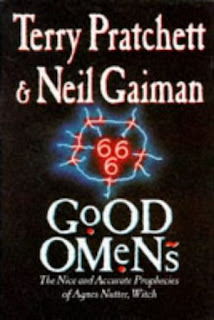 Good Omens by Terry Pratchett and Neil Gaiman (1990).  I'm not a huge Terry Pratchett fan. I tend to think his whimsical humor is heavy-handed. I do like Neil Gaiman's work, though, and this novel--about two angels trying to prevent the apocalypse--is a romp through pop culture and religion and you name it.

Good Omens makes a good companion piece to Christopher Moore's Lamb. I loved, loved, loved christopher Moore's Practical Demonkeeping and also liked Coyote Blue quite a bit. I've read pretty much everything he's written and while Lamb is not my favorite, it's a lunatic piece of work detailing Jesus "lost years" as told by his friend Biff.

The Gospel, According to the Son by Norman Mailer (1997). One of my English professors, Reynolds Price, was a biblical scholar and he was pretty scathing in his review of Mailer's novel, which he didn't think was "inventive" 'enugh. (One of my other professors, Buford Jones, used to make fun of Price for his heavy-handed allegory in the novel A Long and Happy Life.)

King Jesus by Robert Graves (1946). Graves is  the man who gave us I, Claudius and Claudius the 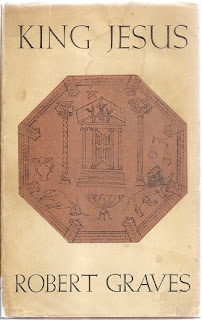 God. He also wrote The White Goddess, a book on poetic mythmaking that was required reading, along with Joseph Campbell's The Hero with a Thousand Faces when I was just starting out as a writer. The book views its title character as a philosopher rather than a messiah.

The Silver Chalice by Thomas B. Costain (1953). I read this book when I was in high school and liked it a lot. (I also loved the author picture, which depicted Costain and his very fluffy white cat.)
It's about a Greek artisan named Basil who crafts a silver chalice to house the Holy Grail. I don't remember it being a "prequel" to the Arthurian legends of the Holy Grail, though, so I may re-read it.
Posted by Katherine Tomlinson at 8:49 PM