There is no one California when it comes to literary depictions of the state. The San Joaquin Valley was immortalized by John Steinbeck's books, including his masterwork The Grapes of Wrath) but Jack Finney's The Body-Snatchers was also set there, as was T. Jefferson Parker's Summer of Fear, and John Lescroart's Hard Evidence, and James Patterson's Third Degree.

Los Angeles is the city that spawned hard-boiled detective fiction, a sub-genre that's alive and well with writers like James Ellroy (L.A. Confidential) and others who inhreited the mantle from Raymond Chandler. Further south, you find Don Winslow's Dawn Patrol, and om Wolfe's The Pump House Gang, and Vernor Vinge's Rainbow's End. The first truly "Califonia" book I ever read was Joan Didion's Play It As It Lays, and then later, her books of essays about the place, The White Album and Slouching Towards Bethlehem.


But for me, California--and particularly Los Angeles, where I lived for years--is a place that's so unique that even the non-fiction about it seems to resonate with drama and character. You've got the true crime books like Vincent Bugliosi's Helter Skelter And The Sea Will Tell, as well as Joan Barthelme's A Death in California. You have Joseph Wambaugh's Lines and Shadows, The Fire Lover, and The Onion Field. The Fire Lover struck home with me because it was about a serial arsonist who struck one Christmas at a little strip mall one block from the house I was renting. The fire didn't quite take hold as it should have and what could have been a blocks-long conflagration--all the stores shared common walls--ended up being fairly minor.

Not interested in true crime? Read City of Quartz, Excavating the Future by Mike Davis. Read Lillian Ross' landmark book Picture, which details the making of The Red Badge of Courage with war hero Audie Murphy. One of the most interesting books to come out of Los Angeles in the last few years is Michael Leahy's The Last Innocents: The Collision of the Turbulent Sixties and the Los Angeles Dodgers. (Full disclosure, I've known the writer since I worked for Los Angeles magazine and beta-read his first book, Hard Lessons, which chronicled a year at Beverly Hills High School. My Century City office looked down on the grounds of BHHS, which has a working oil well on it.) 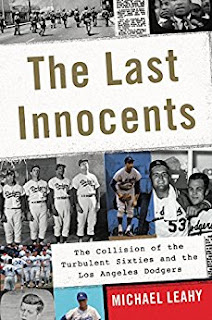 Baseball is my least favorite sport--it comes in somewhere between cricket and curling in the scale of my interest--but Leahy is one of those writers who can suck you into a book about something you don't particularly care about and then keep you there until you're finished. As a social history, it's top notch, and The Last Innocents has won a slew of awards.

Posted by Katherine Tomlinson at 5:37 PM