For my generation, Joyce Maynard's Looking Back: A Chronicle of Growing Up Old in the Sixties pretty much summed things up. The author, an elfin, barefoot figure in jeans and a yellow sweater stared solemnly at the reader from the cover, and you got the picture. This is an "old soul." Maynard's book was highly praised at the time and since its publication in 1973, she has written about the various stages of her life. She was born in 1953, so she's gracefully aging into her middle years now.) 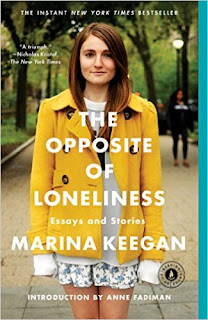 I don't really know who spoke for Gen X or Gen Y but when Marina Keegan first burst onto the scene, it was clear that she was a talent to be reckoned with. The Opposite of Lonelness is a collection of her essays and short stories and a showcase for a writer already confident and accomplished. Sadly, it is a posthumous collection, and unlike Joyce Maynard, we will never have the pleasure of seeing the writer mature. She died in a car accident just after she graduated from college.

If you want to write, write. Life is not a dress rehearsal.

Posted by Katherine Tomlinson at 7:14 PM