You could probably read one Illinois-related book a day and go for years. for poetry, you've got Carl Sandburg and next to his line about "the fog coming in on little cat feet," the poem every school kid in America had to learn was "Chicago." Who could ever forget the first lines?


Hog Butcher for the World,
Tool Maker, Stacker of Wheat,
Player with Railroads and the Nation's Freight Handler;
Stormy, husky, brawling,
City of the Big Shoulders.

"City of Big Shoulders."   That's such an elegant line. And then there's Chicago-born John Dos Pasos, whose monumental USA Trilogy really is "the great American novel" times three. (And he also infuenced E. L. Doctorow, whose books I devoured in high school.)

Illinois is a complicated state and the three books I most associate with it are Richard Wright's Native Son, Sandra Cisneros' The House on Mango Street, and Ray Bradbury's Dandelion Wine. It is also the setting for Erik Larson's brilliant book about H.H. Holmes, America's answer to Jack the Ripper--The Devil in the White City. Anyone who has trouble wrapping his/her head around #BlackLivesMatter needs to read Wright's novel, which is a searing character portrait and a time capsule of life in Chicago in the 1930s. "Bigger Thomas " is one of the most compelling characters ever created.

Cisneros' novel is a coming-of-age story that should be as widely read as A Tree Grows in Brooklyn. (Am I the only person who never really liked that book? Maybe I read it when I was too old.) The heroine and narrator of The House on Mango Street is Esperanza Cordero, and she is a sympathetic and believable girl. 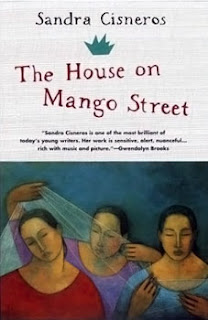 Dandelion Wine, Ray Bradbury's semi-autobiographical novel, is an idyllic portrait of the same sort of America that painter Norman Rockwell chronicled. It's a book that evokes a childhood so (mostly) happy that it almost seems like a fairy tale.

I read The Devil in the White City for a client and loved Erik Larson's writing. What really entranced me about the story was not the true crime it detailed, though. I fell in love with the idea of the Chicago World's Fair that was its backdrop. The World Columbian Exposition of 1893 was well-documented in photographs and drawings and I was fascinated by the temporary buildings and wonders put up for the occasion. I so wish some of them had been left behind, the way the Seattle Space Needle is a permanent reminder of the 1962 World's Fair.)  If time travel were possible, that's a place I would have loved to go.
Posted by Katherine Tomlinson at 8:21 AM