I drove to Sun Valley once with my roommate, a former professional ice skater. We were going there to see an ice skating competition. The mountains were lovely, but I chiefly remember that trip because we stopped to get gas along the highway and a couple of yahoos tried to convince us that some random part of the car was so worn down it was a danger. 'I wouldn't let my daughter get on the road with a car in that shape." We chose to ignore the warning but I was completely paranoid that the guys had done something to the car that would cause it to break down. (I know, I've seen too many horror movies.) But as it turned out, we were fine and there was no problem with the car. I haven't been back to Idaho since, although a friend of mine used to live in Boise and loved it there, despite the extreme weather both summer and winter. (Idaho's a red state but it Boise mayor Dave Bieter sounds pretty progressive. But somehow Idaho is a state that feels like it has a dark underbelly. The Boise Weekly used to have a Historical True Crime feature and the stories in it were fascinating. 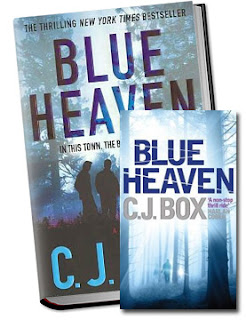 The best book I've read set in Idaho is C.J. Box's taut thriller Blue Heaven. (You can read the first chapter here.) Blue Heaven was a stand-alone novel--Box writes the popular "Joe Pickett" series, and won the Edgar in 2009. The story revolves around two kids who have seen four retired cops commit murder. They're on the run in the Idaho wilderness and their only hope for safety is a rancher on the brink of losing everything. Good characters. Great local color. A smart plot (if somewhat farfetched) plot. Blue Heaven is a great read.


Posted by Katherine Tomlinson at 1:44 PM