He'll always be Hans Gruber to me. RIP Alan Rickman. 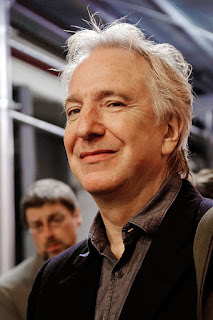 Yes, yes, he was in the Harry Potter movies, but he'll always be Hans Gruber to me. I started working for Silver Pictures the month that Die Hard came out. I've always liked action movies and Die Hard, like many of Joel Silver's movies, established a new story paradigm that other companies were quick to pick up on and run with. I cannot tell you how many "Die Hard on a (fill in the blank)" movies I read in the 18 months I worked there.Some were pretty cool, others were just lame knockoffs.

Bruce Willis ruled as John McClane in Die Hard. I'd only ever seen him on Moonlighting and in those beer commercials but he had a good smirk--only Clark Gregg does it as well--and I  liked his style. He was great. But Alan Rickman as Hans Gruber? He was perfection. Sinister and smart and he had the first "resurrected villain" moment that ever really worked for me.

The next thing I saw Alan Rickman in was Robin Hood: Prince of Thieves and my favorite scene in the whole movie was the one where he (as the Sheriff of Nottingham) has a conversation with Michael Wincott's hilariously dim Guy of Gisborne. "I'll cut out his heart with a spoon."  "Why a spoon cousin?" "Because it will hurt more."

Posted by Katherine Tomlinson at 11:47 AM