A Vampire a Day: They Thirst by Robert McCammon 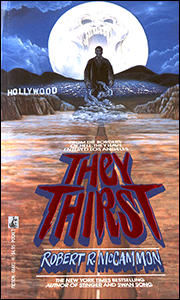 Anyone who knows me knows that I am a huge Stephen King fan. I think The Stand is a monumental book. I first read it while home sick from school with a horrible case of the flu and believe me, the chapters covering the spread of the plague scared the bejesus out of me.
But as much as I love The Stand, I think Robert McCammon's post-apocalyptic novel Swan Song is even better. I first read that while staying in a series of really awful motels during my first cross-country drive. I'd drive for 10-12 hours and then read until I couldn't read any more. I pulled into L.A. with a bad sunburn on my left arm--I didn't have air conditioning in my car--and about 100 pages left of the book.
They Thirst was the first of McCammon's books I ever read. Then I read Wolf's Hour, which is a Nazi/werewolf thing. I liked both of them. They were pulpy fun, the sort of horror novels you could read in a single sitting.
Like King, McCammon defies categorization. He writes horror, yes, but other things as well. I'm a big fan of his short stories, particularly one called "Night Calls the Green Falcon," which Birdman reminded me of a bit.
McCammon disappeared from publishing for nearly 20 years, and that's a shame. He has a new novel out as of last year and it's on the ever-growing TBR pile.

Posted by Katherine Tomlinson at 11:51 PM