A Vampire a Day: Daughters of Darkness: Victoria by W.J. May 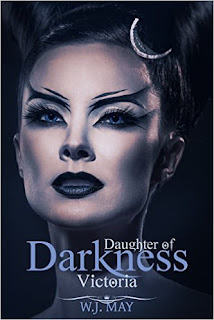 There are a lot of vampire novels (or in this case, novellas) out there, and I realized I had about a bazillion of them on my Kindle. I decided to see how many I could read in a month. I'm aiming for one a day. Here's the first one.

This is a novella, which is exactly the bite-sized bit of story I was looking for today. I like the setup of the daughters of Vlad being scattered all over the place and so numerous that they don't necessarily know each other. That makes sense to me. After a couple of centuries, it would be easy to lose count of your progeny, particularly if you move around a lot.

The title character is a "hunter," and as the story opens, she's after a girl who's a witch. But complications ensue when she finds out that the witch is actually one of her (many) sisters. And then, it gets really complicated.

Victoria (or "Tori" as her hunting partners call her), is a tough chick in the obligatory skin-right black leather outfit. She doesn't have a lot of patience with humans or half-vampires who can't keep up. (But who does really?)

A lot of this feels like it's been filtered through the UNDERWORLD movie franchise (vampires versus werewolves), but that's not necessarily a bad thing.  I like adding the witch element, especially when we find out that the witch in question is untrained and having to "wing it" as her magic is activated with a heavy blood scent. I prticularly liked it when Tori corners her prey and the witchling's newborn powers seem to be fizzling out. Because you could see that happening!

Tori starts out with a little Katniss action (she's armed with a bow and arrow) and then switches to guns, but before the story's over, we get ultraviolet guns and gizmos. It's fun. The writer also gives us a sens eof a larger universe at work, with talk of "the Council."


I liked Tori's style, especially the irreverent way she refers to her "father." Because again, that's something that makes sense from a character standpoint. You can respect your parents and still think they're dumb.

Things I didn't like:  I was not familiar with the writer, so I was disappointed, that the link to her website embedded in the file didn't work but technical glitches happen. There were also some of those distracting copy-edit glitches that drive people crazy. (REally, "female heroines" is redundant and if you're going to credit an editor, that editor should have caught things like "she let's her go."

I also wasn't crazy about the cover, which looks like Victoria is Spock's vampire cousin. "Live REALLY long and prosper." But as an indie author myself, I know we're all working with the same somewhat limited pool of stock images, so I tend to be an "easy grader" when it comes to covers. (Especially since I've read some traditionally published books with some of the ugliest covers I've ever seen.)
Posted by Katherine Tomlinson at 4:31 PM