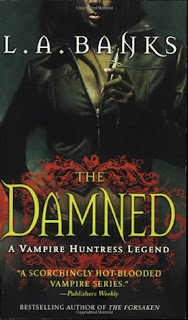 One of the things that has always bugged me about vampire stories is that most of them are about white male vampires. Most of the mythos in these books is derived from Eastern Europe and except for a few things, hasn't really changed since Bela Lugosi first donned his cloak,. Where are the Chinese vampires? Where are the Turkish vampires? Where are the African vampires?
You can find some African-American vampires on screen. (Essence Magazine put together a gallery of their favorites from Vonetta McGee to Eddie Murphy to Grace Jones.) But there are still not that many black blood-suckers stalking the pages of paranormal romance novels.

A handful of authors have multi-racial casts, but as often as not, they get tagged  "urban," as if vampires, like actors who play James Bond, have to be white. (Seriously, for a while there the rumor was that Idris Elba was in the running to be the next James Bond and that would have brought a LOT of people back to the franchise, including me. Although I'd also like to bring Judi Dench back. Maybe as a vampire.)


But it's not just vampire books, it's PNR as a genre. Writer P.J. Dean, who writes multicultural/interracial PNR posted this on the the Galaxy Express blog two years ago. She mentioned at the time she started writing her own books, the only African-American heroine she could find was Damali from the Vampire Huntress Legend series by L.A. Banks.(Banks, who was African-American, died in 2011 of adrenal cancer at the age of 51. And she is missed.)

There are 12 books in the series, featuring Damali Richards (a spoken-word artist), a "chosen one" whose mission in life is to fight the beings of the Dark Realm, including vampires. If you haven't read any of the books, a binge-read is in order.

Check out P.J.'s blog: Diverse Views: Isn't Romance for Everyone? for more about her works.

Posted by Katherine Tomlinson at 4:33 PM