A Vampire a Day: Of Saints and Shadows By Christopher Golden 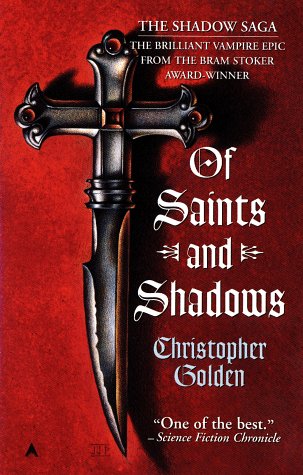 I'm a fan of Christopher Golden's. I've mentioned that I'm an admirer of the illustrated novel Baltimore, which he wrote, and his Joe Golem: Occult Detective series is wildly entertaining and I love the world it's set in--a mostly drowned New York where the poor people live in the watery areas and the rich live uptown. I didn't know that there are actually multiple volumes of Baltimore, so hooray for that. (Here is a list of his books, if like me,  you don'thow many books he has for you to discover and enjoy.)
I love that Golden writes in multiple genres, and for teens as well as adults. I love that he writes video games and comic books as well as novels. (Is he the ultimate geek or what?  I'd love to run across him at #SDCC some time.) He's also very open to fans approaching him on his Facebook page and from his posts, he seems like a really decent guy.
I found Of Saints and Shadows in a used bookstore, captured by the cover, which uses familiar vampire tropes (crosses, daggers that look like fangs, red backdrops) in a way that seemed elegant and decadent and interesting.
I didn't know at the time that it was the first in a series--I'm not sure it WAS meant to be the first in the serie (it was published nearly 20 years ago), but it was urban fantasy of the first order. I LOVED his protagonist, Peter Octavian.
This novel has pretty much everything I crave. Golden has created a really rich world and mythos for his vampires (who lust after the "blood song") and the backdrop of the Venice carnival is particularly gorgeous. (Why should all the vampire stories be set in Paris?)
You will REALLY like this one and there are half a dozen sequels in the series to enjoy after this one.

Posted by Katherine Tomlinson at 11:00 PM