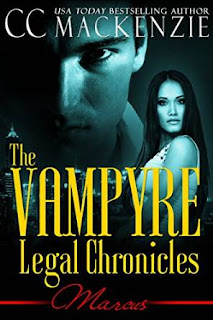 This book caught my eye because I'm a sucker for urban fantasy stories that combine real-world type situations with paranormal creatures. I love Batton Lash's WOLFF & BYRD series and have always thought it would make a fantastic television show. (I love the tagline for the series--"Beware the Creatures of the NIght. They have laywers.") At first I didn't notice that the little red squiggle at the bottom of the cover was a name (MARCUS), I just thought it was part of the design. This book is part one of a three-part series, and all of the volumes are available, both as individual books and as a boxed set/collection. That's always good.

This is actually billed as a vampire romance, but while the writer did a good job with that element of the story, what interested me more was the way the corporate backdrop played out against the magical elements. And it's not just vampires on the loose here, there is magic--true, and DARK magic.

The vampires (the spelling with a Y just annoys me, so I'll use that and not  the spelling the author prefers) have a history and have personalities. Duncan Gillespie, a vampire elder and a vampire prince, is ancient but not entitled, and he immediately stands out in a sea of "alphahole" vampire princes preying on gorgeous young people.

Right from the start, the author gives us bits and pieces of a wider world. Gillespie, for instance, wonders if he's beginning the life transition known as "the Fade." (Even vampires don't live forever.) But we know that Duncan is not one of the people on the cover--the male vampire is presumably the "Marcus" of the title and the woman (despite her less-than-corporate attire) is most assuredly Anais, the ambitious lawyer we're told Marcus has been mentoring.


We also learn (as with yesterday's book), that this vampire world contains witches, some of whom are vampire as well as witch. That works for me. I have a firend who writes a very sucessful series of paranormal romances about a witch clan in the southwest, and witches seem more interesting than just plain vampires. I also like that the story really is set in the real world. When we first hear about the vampire witch Ezekial, he is fighting battles in the Sinai, his magical clashes hidden beneath the very real conflict there. One of the things that I often find annoying about urban fantasy is that it so often simply takes place in a real world that has about as much reality as an episode of The Andy Griffith Show.

There's a lot to enjoy in this book, which throws in just about everything but the kitchen sink (portals, bird and swine flu epidemics, vampire scientists, deal-making in Shanghai). the writer takes time to set up the larger world before moving on to the romantic (and career) complications of our newborn vampire Anais.

Anais is probably not as focused as she could be, but in a scene where she needs all her wits about her, one of the participants in the negotiations sends her off-balance by calling her a name. We sympathize with her in that moment and she keeps our synpathy all the way to the end.

What I didn't like: The formatting is not very well done and there are lots of gaps in sentences and paragraphs. And there are occasionally redundant lines like the description of a sky that is "the color of deep pink." Simply saying it was a deep pink sky would have worked for me.

But really, I liked the narative tone. It's got a tinge of humor in it that tells us the writer isn't taking things too seriously or being too pretentious. I'll definitely check out the other books in the series.

Posted by Katherine Tomlinson at 4:04 PM