A Vampire a Day: The Shiny Narrow Grin by Jane Gaskell 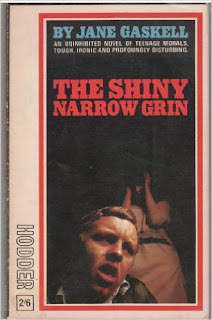 Jane Gaskell wrote her first novel, Strange Evil, when she was 14.  Nobody had ever seen anything like it. (You can still find copies around. Here it is on Amazon with illustrations by Boris Vallejo.) China Mieville has called the book the first example of "new weird," a genre he now owns. Gaskell worked as a journalist for a while, and continued to write fiction until 1990. According to Wikipedia, she is now a professional astrologer.

The Shiny Narrow Grin is Gaskell's vampire novel and it is soooooo 60s pubished in 1964). I have a friend, born in the 70s, who is fascinated by everything Swinging Sixties, and this is one of her favorite books. The Shiny Narrow Grin .  the book is almost impossible to find. But strangely, it's up at Wattpad. (Read it here.)

Posted by Katherine Tomlinson at 9:19 AM