A Vampire a Day: Salem's Lot by Stephen King 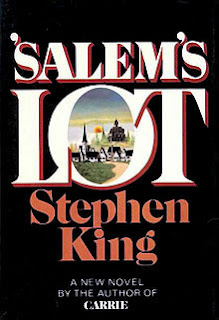 I'm pretty sure this was the first book I read by Stephen King. I never read Carrie, but I picked up Salem's Lot at the Westover Hills Public Library in Richmond and was completely hooked. I am an unabashed fan of King, and think he's a master at crafting character. (I believe he is the Charles Dickens of our generation. He is superb at characters. And even on his worst days--Desperation, Rose Madder, I'm looking at you--he's better than most people.)

I loved the way he played with the tropes of the vampire myth in this book, especially the way he did the "stake through the heart" thing. I liked the pairing of the kid and the writer who has come back to his home town. (SPOILER ALERT) He has written about killing the love interest in the book and he's absolutely right about the way that unsettled the reader. Because if he killed her off, what might he do next???

I also really liked the first television adaptation of this. David Soul, Lance Kerwin, James Mason and a scary, Nosferatu-type vampire. The scene where a vampire Geoffrey Lewis floats outside the young hero's window was damn scary. (Geoffrey Lewiswas one of my favorite character actors. I saw him in a spoken word performance years ago and he just killed it.) James Mason was perfect.  (And another example of the "all the villains are Brits" idea.)

Salem's Lot was written when King was only 28.
Posted by Katherine Tomlinson at 2:41 PM