Most Stylish Vampire Ever: David Bowie 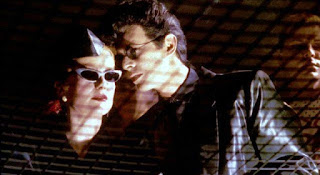 I was never much of a rock concert goer, but I saw David Bowie in concert when he was touring in support of his Let's Dance album. It was a great show and I can't even remember who the opening acts were.

My mother LOVED David Bowie. She got cable TV around the time that MTV started and the video featuring David Bowie and Mick Jagger singing "Dancing in the Streets" was one of her favorite videos. Bowie looks incredibly young, elegant, and sexy in it and it's bouncy and fun.

Bowie didn't do a lot of acting but when he appeared in a movie--whether Merry Christmas, Mr. Lawrence or Labyrinth or Zoolander--he made an impact. And in Tony Scott's stylish vampire movie The Hunger, he and Catherine Deneuve were probably the sexiest vampires ever.

Bowie celebrated his 69th birthday on the 8th and died yesterday. RIP David.
Posted by Katherine Tomlinson at 2:24 PM