A Vampire a Day: House of Night Series by P.C. Cast & Kristin Cast 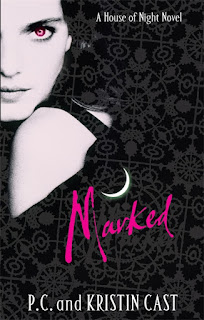 I was skeptical about the setting of this vampire eries. Tulsa, Oklahoma? I wasn't really feeling it, but the writers (a mother/daughter team who formerly wrote under one name), convinced me with the opening scene--a visual of the big PRAYING HANDS sculpture at Oral Roberts University. And then they introduced readers to a series of landmarks they'd claimed for their own characters and I went Googling around to find the Art Deco train station and the estate they used. That train station is beautiful. Abandoned and haunted.

The authors also did a good job of coming up with an explanation for vampirism that involves science not the supernatural. It has to do with "junk DNA" and the condition is triggered by puberty. I liked that a lot. What didn't quite work for me was that the vampires start getting spontaneous tattooing on thier faces and bodies the stronger they grow--that's the MARKED of the first book's title. It's kind of a trope that werewolves have tattoos, and also "hunters" of various kinds, but I hadn't encountered tattooed vampires before.

I' was interested in the heroine, Zoey, who has a Native American grandmother and a complicated home life. (Her mother married a religious nut who thinks being marked as a vampire is worse than being a devil worshipper. that storyline plays out over the course of several books and it's heart-wrenching.


When Zoey gets to the HOUSE OF NIGHT, she's paired up with a bubbly girl named Stevie Rae who just bugged me to death with her folksiness. She also encounters a pair of BFFs who are known as "the twins" even though one is a gorgeous black girl and the other is white. There's also a "mean girl" who takes one look at Zoey and sees competition. I was interested in the mean girl.

For me, the best thing about the stories is the way the writers integrated Native American mythology and once they introduced the "Raven Mockers," I got REALLY interested. This is a series that gets better and better and I'd say stick with it.
Posted by Katherine Tomlinson at 11:11 AM