A Vampire a Day: Vamp 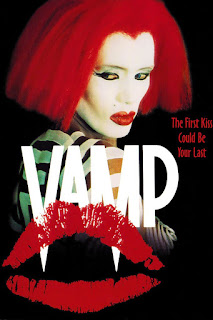 I have a theory about vampire movies and the lackluster performance of 2014's Vampire Academy bears it out. I don't think audiences really like comedy blended with their vampire stories. Buffy the Vampire Slayer was a hugely successful television series but the movie it was based on only made $16 million domestically and was never released overseas.
Vamp was a movie I saw one weekend when my roommate and I scooped up a ton of videos more or less at random because our local video store was already out of all the new releases. I wasn't expecting much, frankly, but as it turns out, I was pretty entertained. for one thing, Grace Jones as the vampire was both sexy and scary. For another, some of the comedy really worked. (I particularly liked amoment when a character gets staked through the heart but doesn't die because it's formica and not wood.) Robert Rusler as Chris Makepeace's hapless friend was darkly handsome (yes, I can be shallow), and Gedde Watanabe starred as well. Billy Drago and Sandy Baron also co-starred and were perfect.
If you're looking for something pulpy and silly to watch one Halloween night, check out Vamp.
Posted by Katherine Tomlinson at 3:14 PM