A Vampire a Day: Those Who Hunt the Night by Barbara Hambley 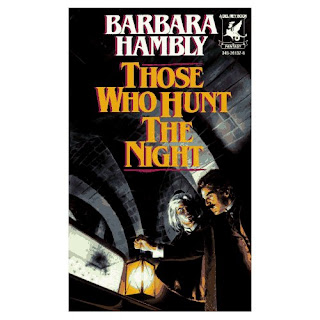 When I moved to the Pacific Northwest last year and was paying my movers $20 a box, I culled my book collection ruthlessly. I have a Kindle and I like the convenience of an eReader but there are some books that I just want in my actual library. Those Who Hunt the Night made the cut, along with its sequel, Traveling with the Dead.  The book was published in 1988 and now appears to be out of print in paperback, although you can find used copies in hardback. The books have been reissued in a digital omnibus collection, which is convenient.
James Asher, the hero of the novels, was once a spy for Queen Victoria. In the first book, he's approached by a Spanish vampire named Don Simon who wants his help finding out who's killing London's vampires. And let's just say, Don Simon does NOT take "no" for an answer.
I am a huge fan of Hambley's "Benjamin January" mysteries (that's how I first came to the writer) and I was delighted by the James Asher books. Hambley is not a spring chicken and last year was tough for her, but she's still writing and I am so glad for that.

Posted by Katherine Tomlinson at 12:12 PM