A Vampire a Day: Innocent Blood 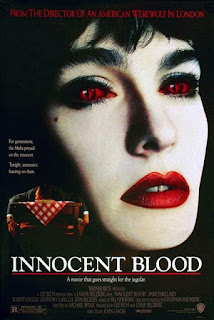 You didn't see this movie. Nobody did. I know this because it was a Warner Bros. movie and I was working at WB at the time. In fact, I was working at Warner Bros. helping develop a vampire script that had been written by two guys who'd penned a massive, franchise-spawning hit. The premise of the script was original and featured vampires in Vegas preying on people in 12-Step programs. We submitted the script to the studio the weekend Innocent Blood opened and on Monday, our script was deader than disco. And unlike vampires, it did not rise from the dead. (For the record, Box Office Mojo says it made less than $5 million in domestic release (and even in 1992, that was terrible). It never got an international release and considering the global appetite for horror, that tells you just what a stinker the studio had on its hands.

On paper, the movie was a no-brainer. Directed by John Landis, starring Anne Parillaud who was hot off La Femme Nikita, and the late, great Robert Loggia, with Anthony LaPaglia and Angela Bassett in supporting roles. The movie was chock full  of character actors, from Zhazz Palmenteri to Luis Guzman. Even Don Rickles showed up. The storyline combines romance, Mafiosi, and dark humor. Maybe it was the humor that was the problem. Audiences seem to prefer their vampire movies straight up unless it's an out and out spoof like Vampires Suck.

It had a GREAT poster. The kind of image you could see on a paranormal romance today. No fangs, just Anne Parillaud's gorgeous face and big red eyes.

If you're curious, you can watch the trailer here.

Posted by Katherine Tomlinson at 2:35 AM