A Vampire a Day: Jim Carrey in OONCE BITTEN 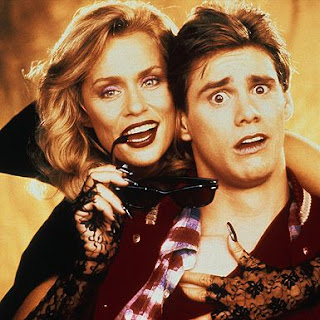 this 1985 movie is a take on the Countess Bathory legend about a countess who bathed in the blood of virgins. In this iteration, Lauren Hutton's vampire Countess must drink the blood of a virgin to maintain her eternal beauty. But this is the 80s and virgins aren't that easy to find. Until...Mark Kendall (Jim Carrey) comes along.

the movie was made five years before Jim Carrey broke out in In Living Color and nine yearss before he starred in the trifecta of films that turned him into a superstar--Mask, Ace Ventura, and Dumb and Dumber. Once Bitten was released to 1095 theaters nationwide--it didn't even get a release in Carrey's native Canada--and grossed just a little bit more than $10 million. Even twenty years ago, that was a pretty poor performance.Janet Maslin, legendary critic for the New York Times gave it a thumbs up ("Call me crazy, but I liked it") but she was pretty much the only one. It's really a TERRIBLE movie, although i have friends who like to wallow in 80s kitsch and claim that it's actually a perfect time capsule of L.A. in mid-decade. Which may be true, but I don't have a lot of nostalgia for either the time period or the city.

Posted by Katherine Tomlinson at 5:36 PM