A Vampire a Day: FOREVER KNIGHT: Intimations of Immortality by Susan Garrett 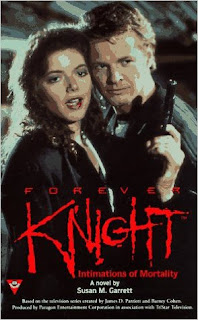 I knew Susan Garrett. She was a friend of a friend of mine and soon after we met I realized that Susan was a friend to everyone. She was warm and generous and lovely and when she died a few years ago, even though I hadn't known her long or known her well, I felt bereft.
Susan was active in the fan fic community, writing stories in several different universes, including Forever Knight, the Canadian television show that has attained cult classic status. She and I shared a fondness for Forever Knight. (My best friend is a dead ringer for actor Geraint Wyn Davis, who played the vampire lead.)

The powers-that-be producing the show read some of Susan's fan fiction and invited her to write one of the tie-in novels. I think there were three, but this is the only one I ever read. It was a lot of fun, and can be read as a stand alone, even if you never saw the show. It preserves the struction of the television episodes, which involve a modern-day story taking place in an unnamed city (clearly Toronto because you can see the CN tower in most of the exterior shots) and then flashing back to a time in the main protagonist's past life.

The book was a mass market paperback published in 1997 and you can still get copies on Amazon for a penny and postage (around $4). If you like vampires with a side-order of romantic angst, you'll love this book. And you'll love Susan's writing too. A lot of her fan fic is still online, so if you liked this story, you can find shorter works she wrote.
Posted by Katherine Tomlinson at 1:59 PM