A vampire a day: Baltimore by Michael Mignola and Christopher Golden 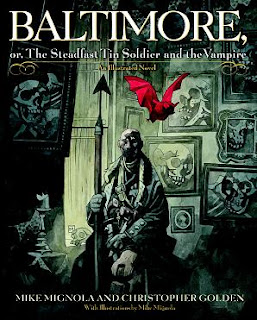 This illustrated novel is collaboration between Michael Mignola, who created Hellboy and Bram Stoker Award-winning novelist Christopher Golden.  The result is a stylish dark fantasy with enough literary trappings to entice readers who wouldn’t ordinarily be caught dead (undead?) reading a graphic novel.  It’s a character study featuring four distinctly different men with experience in the paranormal, all of whom have unique stories to tell.

We are in an unnamed European city, sometime during the years of Great War.  The battles still rage, but a plague born of vampire blood breath is abroad and inside the City, everything is dead.  In fact, the plague has reduced the war to a mere sideshow, fought only by those who cannot admit that it no longer matters.

The men, who are strangers to one another, have been summoned by Captain (Lord) Henry Baltimore, whose friendship they have in common.  They arrive at their destination—a deserted inn—before Baltimore and pass the time by exchanging tales of horror.

Heart of Darkness, the classic Joseph Conrad novella, begins with people telling stories too, and I doubt that's an accident. There are all sorts of "references" in this story, which is rich and layered.

Posted by Katherine Tomlinson at 9:55 AM