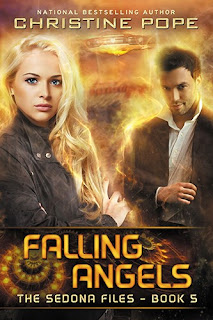 Best-selling author Christine Pope has new book out in her paranormal romance series "The Sedona Files."  I thought this would be a good time to ask her a few questions.

Falling Angels is the next-to-last book (oh no!) in your “Sedona Files” series. When you wrote the first, Bad Vibrations, did you know you were going to chronicle the second generation of your characters?


Frankly, I didn’t even know it was going to be a series. Back then, I really didn’t know what I was doing, and thought writing standalone books was the way to go (hint: it isn’t, at least in the vast majority of cases). But then I began to think how about how I could expand that one book into a series, and started working out the bigger-picture arc of the alien conspiracy/invasion that’s always going on in the background (and sometimes the foreground) of the books. As for the second generation, after I was done writing Angel Fire, I realized I really wanted to tell Grace’s story once she was an adult, and it sort of fell into place that I’d create a second trilogy that takes place approximately twenty-five years after the end of Angel Fire. So that’s why I wrote books for the daughters of the heroines of the first trilogy: Grace (Kara from Desert Hearts’ daughter), Callista (Kirsten from Falling Angels’ daughter), and Taryn, the daughter of Persephone from Bad Vibrations.

Check out the trailer for The Sedona Files:


You’ve got several established series out there—the Witches of Cleopatra Hill, the Latter Kingdom books, the Gaian Consortium stories—but it seems like you’re always coming up with something new for your readers. What’s next?


The Gaian series has been ended (although there’s a prequel short story coming out in an anthology in February 2016), and I’ll be wrapping up the Sedona Files and the Latter Kingdoms books this year as well. I do plan to write more Witches of Cleopatra Hill books, and more books in my Djinn Wars series. There are also plans in the works for a post-apocalyptic zombie trilogy to launch in late 2016. That one will still be romance, just darker and grittier than some of my other books (and no, the romance is NOT with the zombies). After that…I’ll have to see. I have concepts for several new paranormal romance series (and possibly another science fiction romance series), but none of those would launch until 2017 sometime. 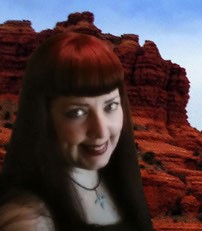 In your PNR, you’ve had witches, ghosts, demons, and now zombies. Have you ever been tempted to write a vampire or werewolf story?


Well…in a word, no. I know they’re popular, but I like writing about paranormal characters that haven’t been used as much. That said, the newest Latter Kingdoms book (which I’m writing at the moment) does actually include a version of one of those paranormal characters, but I don’t want to say much more about it than that.

Speaking of witches—if your Cleopatra Hill books were ever made into a miniseries, who would you cast as Angela and Connor?


That’s tough. If they were a few years younger (Angela is supposed to be twenty-one and Connor twenty-six when the series begins), I’d say Jenna Dewan-Tatum for Angela and Colin O’Donoghue for Connor. But if such a project ever were to happen, they’d probably have to go with unknowns. If people are interested, they can check out my casting choices for my various books on my Pinterest page.


Your PNR novels always reflect “real world” settings with details of “local color” and even names of actual restaurants and details of their menus. Have you ever set a book in a place where you haven’t actually been?


Well, obviously I’ve never been to any of the alien worlds in the Gaian Consortium books, or the world of the Latter Kingdoms. ;-)  In terms of my books with contemporary settings, though, no, I haven’t. I’ve had readers comment on the realistic detail of the settings in my books, and I’m sure it’s because I’m describing places I’ve either lived or at least visited. I’m not saying I won’t ever set something in a place I haven’t been, but so far that hasn’t happened.


I love that you always describe the cars your characters drive. That makes me feel like I have an extra insight into their personalities. Are you a car nut?


I wouldn’t say I’m a car “nut,” but I was raised by someone who loved cars (and in fact, my grandfather was a mechanical engineer for a company that had a lot of involvement with the Indianapolis 500 back in the day). I also worked for a variety of car magazines as a copy editor and managing editor before I became a full-time writer. So I’d say I do have a lot of background in the automotive industry, and it probably comes out in my choices for my characters’ rides.


And finally—what are you working on right now?


I’m currently writing the next Latter Kingdoms novel, which will come out in March. After that, it’ll be a new Witches of Cleopatra Hill book, followed by the final Sedona Files novel, which I’m planning to release in late May. I’d like to say I’m taking a break after that, but my calendar is basically full until the end of the year. So many books, so little time!

Posted by Katherine Tomlinson at 9:11 PM