The Goblin Crown by Robert Hewitt Wolfe, a review 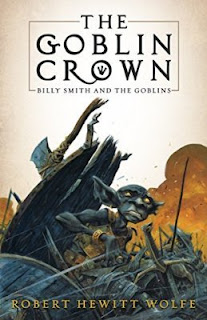 Like Guy Gavriel Kay’s FIONAVAR TAPESTRY and Suzanne Collins’ wonderful UNDERLAND CHRONICLES or C.S. Lewis’ CHRONICLES OF NARNIA, Robert Hewitt Wolfe’s THE GOBLIN CROWN, is a story of ordinary people suddenly thrust into an extraordinary, magical world. We know up front that this world is a dangerous place and that the stakes—whatever they are—will be real and that actions will have consequences for Billy, Lexi, and Kurt, as well as all they meet.

Billy, our hero, is an outsider, a kid who has NEVER felt he fit in anywhere and who certainly doesn’t expect that his high school experience is going to be any different. Billy is, a familiar enough character, but Wolfe nails him, bringing him to vivid life on the page. But pretty Filipina Lexi—who really isn’t very good at minding her own business—and bullying jock Kurt are also three-dimensional and believable people. These characters are grounded—no, rooted—in reality and we believe they act in a way that has context. (There’s a lovely, magical moment when Billy meets all the freckle-faced, redheaded men who came before him and takes courage from the encounter.

The magical creatures in this world, from Hob on down, also act out of recognizable motives and desires and dreams. This is not a book where a character is just evil “because” or “the chosen one” because that’s what’s needed to tell the story.

From the opening pages of this book, when a goblin is musing on the inevitable fate of those who are known by titles such as, “The Dark Lady,” or “The Emperor of Night,” readers will know they’re in for a rare treat—a book that honors the tropes of fantasy but with an edge of intelligent humor that never lapses into the sometimes unfortunate hijinks found in works by Douglas Adams and Terry Pratchett.

It’s clear the author has a deep love for the genre and has put time and effort into creating the world of his story. His thoughtful epilogue about goblin naming traditions shows just how “deep” this world goes. (This is, huzzah, the first in a trilogy, so there are two more books we can look forward to with anticipation.)

This is a wonderful read and destined, I think, to become a classic.

Posted by Katherine Tomlinson at 4:30 PM