Throne of the Crescent Moon ... a gorgeous fantasy book 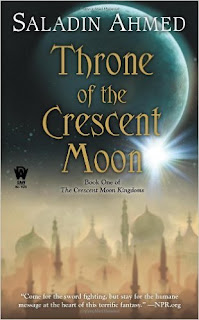 I get so tired of fantasy books that cover the same old/same old ground. Yes, I read the Celtic tales as a kid and Norse mythology as well. But where are the fantasies set in Asia? In Africa? In Latin America? In the Middle East?
Throne of the Crescent Moon has just popped up on my radar and it's fantastic. And clearly, I'm late to the party because when it was published, nearly five years ago, it was a finalist for practically ever fantasy award out there and won the Locus Award for "best first novel." Writer Saladin Ahmed (born and raised in Michigan) also writes short stories and non-fiction. This is book one in a series. I can't wait for the next chapter!

Just read the book's description. You'll be salivating too.

A finalist for the Hugo, Nebula, Crawford, Gemmell, and British Fantasy Awards, and the winner of the Locus Award for Best First Novel, Throne of the Crescent Moon is a fantasy adventure with all the magic of The Arabian Nights.

The Crescent Moon Kingdoms, home to djenn and ghuls, holy warriors and heretics, are at the boiling point of a power struggle between the iron-fisted Khalif and the mysterious master thief known as the Falcon Prince. In the midst of this brewing rebellion a series of brutal supernatural murders strikes at the heart of the Kingdoms. But these killings are only the earliest signs of a plot for the Throne of the Crescent Moon that threatens to turn the great city of Dhamsawwaat, and the world itself, into a blood-soaked ruin.
Posted by Katherine Tomlinson at 10:15 AM