France. Mystery. Two of my favorite things in one book! 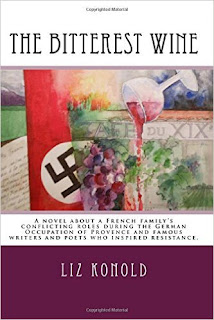 I heard about this book on the amazing French Word-a-Day site.

From the Amazon page:
ll that Professor Claire Somerset expects when she arrives in Provence during the summer of 1978 is a restful visit with friends as she finishes sabbatical research on Surrealist poets involved in WWII resistance. Instead, the attraction between her and vineyard owner Maurice Laurent sets off a series of events that turn her life upside down. Claire is given an anonymous journal that describes a family whose members played different roles during the Occupation: pacifist, collaborator, member of the Resistance, prisoner of war, Nazi officer's lover....and murderer of a fellow family member. The codes and initials used in the journal match the Laurent family. Did the Laurents know of their quiet, simple cousin's part in the Resistance? Did the murderer ever confess what happened? How many more secrets is Maurice's family hiding? Fictional characters and their activities revolve among real people and events leading up to the liberation of Southern France. Each is influenced by writers who kept the idea of liberty alive under the threat of capture, torture and death--such as Albert Camus, Samuel Beckett, André Malraux, Louis Aragon and René Char, the Surrealist poet who organized parachute drops around Mont Ventoux. The importance of the wine industry--war or no war--is woven throughout as the Laurents' disguised cellar hides both refugees and barrels of their best vintages.